Back in the USA!

After nearly seven months in Africa, my return flight to the U.S. touched down at San Francisco International Airport on April 22. Following a little over a week reconnecting with relatives in the San Francisco Bay Area, I then drove my stuffed Audi TT (everything brought back from Zambia, plus what was left behind on my way out of the U,S. to make a one-bag luggage limit, plus mail retrieved that had been forwarded to a friend in Ventura County) a good 1,000 kilometers back home to San Diego. Hot showers in the morning, a functioning toilet, rapid and dependable internet access, along with other creature comforts and conveniences - not to mention quality time with  family and reuniting with friends - it's nice to be home during spring in coastal California!


At the same time,  there's the urban hustle and bustle that contrasts with the generally relaxed and friendly pace experienced at Petauke, and curiosity over how friends and coworkers there are faring. If living in Petauke (albeit following a transitional week of training in Lusaka) entailed "culture shock", coming back to Downtown living in a city of over a million population also involves some adjustment.

Speaking of the trip back, the flight to San Francisco took a great circle route from Europe, passing over Greenland and some spectacular ice-bound scenery.

Posted by msdesmtnsea at 12:52 PM No comments:

Even the Best Laid Plans...

As most of the readers of this blog probably know, I encountered some challenges that ultimately resulted in leaving Petauke for health reasons during the latter part of March, and spending time in Lusaka and then Johannesburg, South Africa before returning to the U.S. on April 22. In the quest to make "lemonade from lemons," I'll reflect on what occurred in the hope that others might benefit from this experience, and also add a few postings dealing with other topics of potential interest not already addressed.
Posted by msdesmtnsea at 12:50 PM No comments:

February has come and gone, with March, the last full month of my placement, under way. In early February, the usual daily rain showers stopped. The days were generally moderate to warm, and the evenings quite nice, with billowy clouds, lovely sunsets and some great star displays. The front porch served well for dinner al fresco. Rains finally returned, but overall, what is normally one of the wettest months was unusually dry, posing challenges for many crops in the field, especially late planted varieties.


February also marked the arrival of a new group of VSO volunteers in Zambia, including several in the Eastern Province. Nice to have them here!
The last weekend in February included N’cwala (a huge traditional ceremony and giant party near Chipata). Last weekend also afforded an opportunity to cross the border to visit Mozambique, which was a fascinating experience, even if only for an afternoon. It even included a spirited football (soccer) match.
Posted by msdesmtnsea at 10:47 PM No comments:

No, this isn’t a review of a new Hollywood horror film nor a commentary on vandals destroying tires. Rather, it’s a brief reflection on another observation of life in Petauke with the passing seasons. Ample and generally regular rainfall during the early rainy season months helped to to bring early ripening maize to harvest, and dense growth of herbaceous plants along roadsides and even in the formerly dry and dusty area around our house. The main method of addressing excessive growth of grasses and other plants in unwanted areas is “slashing” by hand with a tool that’s somewhere between a scythe and a pitching wedge (golf club).
When I tried it in our front yard, it brought guffaws from all observers and resulted in very little effective slashing. We were fortunate to receive assistance from staff at the adjacent Nyika Motel and later behind the house from some of the younger neighbors. It’s a lot more difficult than it looks! The helpers were rewarded with snacks, cookies and refreshments, a small price for keeping our yard from being completely overgrown.
Posted by msdesmtnsea at 1:12 AM No comments:

Our series of initial workshops with representatives of Area Development Committees profiled in an earlier posting has continued apace. As of this writing, seven workshops have been successfully completed, and large schematic maps have been prepared for 21 of the 22 wards that comprise the Petauke District.
In one recent session, a local official commented that he thought this was the most valuable workshop he had attended because of the shared knowledge gained by participants in creating the large map of their area. That was gratifying!

Posted by msdesmtnsea at 11:01 PM No comments:

Not Your Average Weekend Drive


Flexibility and spontaneity are important attributes for a productive and successful experience here. A couple of weekends back, I returned from a morning walk and was about to grab a bite to eat when I learned from housemate Ity that Acting Deputy Council Secretary Jovax Ngoma was going on a field inspection tour and had invited us along. The catch was I didn’t know where or how far we were going, or when we would be back, and the vehicle was leaving in about 15 minutes.


Part of the route (almost entirely on unpaved roads) covered similar ground from my first field excursion with Works Director Betram Daka back in October, shortly after arriving in Petauke. This was of interest in viewing the contrast between the hot, dry season during the initial journey and the current rainy season, as well as having greater local knowledge. We also went to areas that were new, and approached the border with Mozambique.
I had grabbed my camera and served as the photographer to help document the condition of sites visited. Several areas had suffered damage from storms, and some road segments were nearly impassable. After negotiating an especially difficult stretch, we encountered high river levels near the end of the intended loop route, so had to turn around and make our way back via a longer course. Heavy thunderstorms were evident in the surrounding area throughout much of our journey, but just when we thought we were safely past the most challenging stretches, the rains came – in buckets. As darkness approached, the rain subsided, and we returned home feeling rather beat up from the bumpy ride, but exhilarated from the experience.
Posted by msdesmtnsea at 12:39 AM No comments:

A Walk in the Countryside (and More)

Previous posts have alluded to the rainy season transition. During the past weekend, a relatively cool and cloudy day provided an incentive to get out and take a good walk around Petauke. I soon reached the outskirts of town, and headed into a part of the countryside not yet visited. The open expanses of green fields backed by rocky outcrops and distant mountains provided a rather idyllic setting, with a number of folks toiling among the fields of maize (corn) and other crops. While the frequent rains can be an inconvenience (power frequently goes down, usually followed by the water supply system), and the mosquito population seems to have dramatically increased, the more luxuriant vegetation, cleaner skies, cooler temperatures and the closeness of most people to the land illustrate some of the appeal of a more rural lifestyle. Virtually everyone encountered was friendly and welcoming, and happy to share greetings and information about what they are growing.

Getting back to town on the return trip, I encountered several friends and coworkers, including the Acting Deputy Council Secretary (Jovax) near his home (he kindly accompanied me for awhile and provided directions on the best way to my final destination), several other District Council coworkers returning from a funeral, and a couple of friends (Patrick and Andrew) who generously invited me over to their home for a Zambian meal. To top things off, housemate Ity and I met two other VSO volunteers (Adam from our induction group who is working in Siavonga, and Zoe who is working in Delhi, India) later that evening. They were returning from a trip to South Luangwa National Park and Lake Malawi. It was a beautiful, cool, star-filled evening, with great company and a fine dinner at Chemwemwe Lodge!
Posted by msdesmtnsea at 3:19 AM 1 comment:

Welcome aboard! For anyone visiting who doesn't already know me, my name is Mark Stephens. I'm a City Planner by training and profession, and currently reside in San Diego, California. 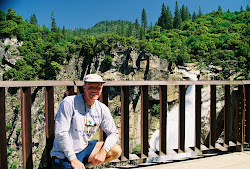 Yours Truly at Feather Falls, California

From October 2010 to April 2011, I volunteered through CUSO-VSO, the North American affiliate of Voluntary Service Overseas (VSO) International, as a Town Planner in the Republic of Zambia. My placement was with the Petauke District Council in Zambia's Eastern Province. The primary motivation for this site is to share experiences and impressions with friends, family, colleagues and anyone else who might have an interest.